Cinderella Season continues for Cornell as they down California, Advance in WPIAL playoffs 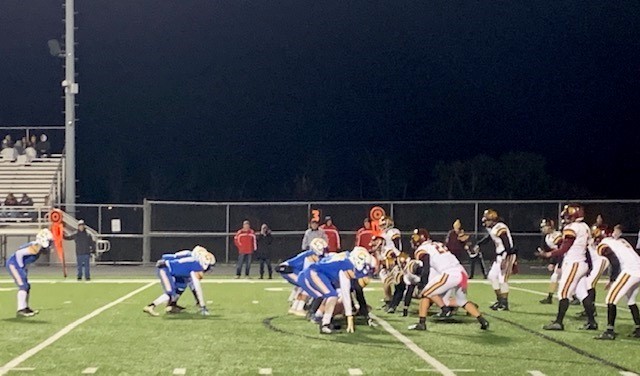 In a game that had plenty big plays on both sides it was the Cornell Raiders who made just enough Friday evening to hold off California 32-27. The win propels this Raiders team into the semi finals of the WPIAL Playoffs where they will play a #1 ranked Clairton Bears team. “This team has been through so much adversity thru the season, these players don’t blink, they just keep playing football and finding a way to win.” Said Head Coach Ed Dawson.

Led by the arm, and legs of Senior quarterback Zaire Harrison who threw for 160 yards, & 2 touchdowns, while adding a TD rushing the Raiders were able to hold off a very talented California team that was led by Jaedan Zuzak who finished with rushing yards and one touchdown. “California did a lot of things different – they kept us off balance in the beginning, they were a big strong team, we had to dig in and just play but we settled down, made the adjustments and kept playing – I told the kids have fun, relax, and play better as a team.”

In an exciting back and forth game that had Cornell trailing 27-26 in the 4th quarter Cornell was finally able to take the lead with a little over 7 minutes to play on a 27 yard TD run by Savon Wilson. Said Harrison “This was huge, we knew we had to play strong, fast, they were a good team, they showed us a lot of different things defensively but we were able to figure it out and make the plays when we had to. We have great receivers, the line played great, we stepped up when we had to and made the plays like we have all season.”

Said Dawson on his team’s first trip to the playoffs, “This has been an incredible week, I have been here 10 years in the school, it was great to feel the electricity when you walk in to the building, the buzz in the community and surrounding our team has been great. Now we have to continue to build on that because we have another week to get ready for.”