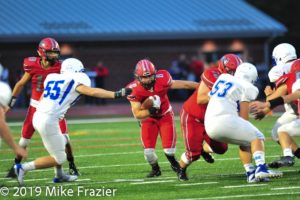 CJ Funk hits the hole on his way to the Bellefonte rushing record. Photo Mike Frazier

Old met new in Bellefonte at the new Rogers stadium. Prior to their game with Bellefonte, the Red Raiders welcomed the 1989 district 6 championship team to the new filed and honored their title.  Later in the evening CJ Funk broke some old records and led the Raiders to a 41-14 thumping of Central Mountain.

On his fourth carry of the night, Funk went around right end for 21 yards to break Bellefonte’s all-time rushing record formerly held by Chris Shivery who played from 1994-97. One carry later, he raced 33 yards to set the school record for most career 100 yard games with 13. On his sixth carry he bolted into the endzone to tie Cameron Heverly (1924-27) for the school’s all-time touchdown mark at 39 and tied the school record for career points at 234, also held by Heverly. For the night, Funk would carry 15 times for 181 yards and one score. He now has 2,672 career rushing yards with 6 and possibly more games left to play.

This @CJFunk8 run gives him the school rushing record pic.twitter.com/d2yoZvjjlN

“First off I gotta thank those guys over there” Funk said while pointing to his linemen who were getting their picture taken. “Without them, I don’t get any yards.” Funk also set the record for career 100 yard games (13) and tied the school record for career td’s (39) and points (234). 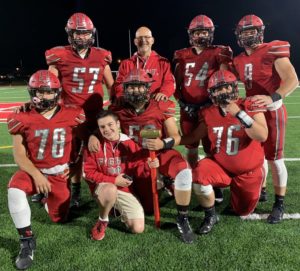 the Bellefonte line with CJ

While Funk was setting records, the Bellefonte offense was also spreading the wealth. Quarterback Ethan Rossman time and again saw his receivers go up an make catches for him (3 td catches in all) while the offensive line opened up gaping holes for Jalen Emel and Rossman to run through.  In all Bellefonte racked up over 500 yards of offense.

Trey Bauman made the first play for Rossman, taking in a shot over the middle and darting 42 yards to the endzone. Just a few plays later it was 6-4, 220 Isiah Nadolsky taking a short pass to the house from 32 yards out and just like that it was 13-0 in favor of the Raiders just four minutes in to the game.

While Bellefontes offense found another gear for the season, the Wildcat offense struggled at times.  Quarterback Zane Probst did manage to connect with receiver Peyton Johnson several times but the Bellefonte defense kept making stops, forcing three punts, collecting an interception and stopping the cats on downs in the first half. 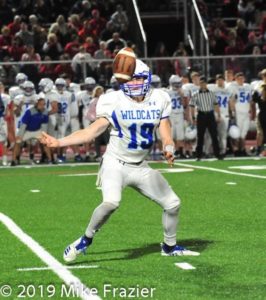 Probst had a tough time keep the offense moving. Here the ball was snapped too early

Funk got his first td on a short run early in the second quarter to put the Raiders up 20-0, then with 4:20 left in the first half Rossman launched on from the 32 and Trae Bauman went high over the defender to make the catch.

Coming out of the break, Central Mountain needed a spark. They got one when Probst found Johnson after scrambling away from the Raiders defense to get the Wildcats on the board with a 50 yard td pass and catch.

That spark was snuffed out on the ensuing Raider drive with a 6 yard td run by Julian Emel. Rossman hit Nadolsky for the 2 point conversion to make it 35-7 in favor of the home team Raiders with 7:12 remaining.

The Raider offense struggled a bit in the second half, but that’s to be expected at times said Manning.  “Your talking about a kid who’s had a total of three starts at quarterback. He works hard and he just keeps getting better” said Shannon Manning. “We have very few seniors on this team and two of them are receivers. That helps us” he said of the great catches  made by Bauman and Nick Catalano. “We love it” said Manning of the upcoming schedule. “We’re heading to Tyrone next week. That’s why you practice, this leaque is a fantastic league. I love it and the teams we get to play.”