Special thank you to Centre County Sports historian Harry Breon for much of the content. 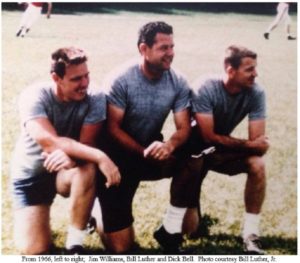 In his later years, it wasn’t hard to spot coach Jim Williams on the field. You just looked for the whitest head head out there. But back before mother nature took the pigment from his locks, all you had to do was look for a player that was paying attention to a coach. “A coach that knew how to get the best out of his players.” Coach Williams became the most successful coach ever at State College. His career in coaching started at Bellefonte with Bill Luther and Dick Bell. “He was a Centre County guy. Grew up in Lemont, went to school at State High” said another former State head coach and assistant to Williams, Ron Pavlechko.

Williams started out as a player on the State High team, then went on to play linebacker for Galen Hall at Penn State. Once he graduated in 1963 it was easy to see that success in coaching wasn’t far away. In 1965 he joined the staff at Bellefonte and for the three years he was there the Raiders put out such great teams that a book was written about them, The Glory Years: Bellefonte High School Football 1966-1969 written by Centre County Sports historian Harry Breon. During those years Bellefonte went 22-3 with a perfect season in 1968 and two all-Americans during those years. Their 1968 team was the first undefeated time at Bellefonte and included a familiar name to Penn state fans, Sam Nastase (AP and UPI all-state selection and was named to the Big 33 football team and was selected as a Scholastic Magazine All-American). During the 1968 season, Red Raider All-State and All-American Sam Nastase used to go one on one with Williams during practice. Sam said “eventually he got the best of Williams.”‘ 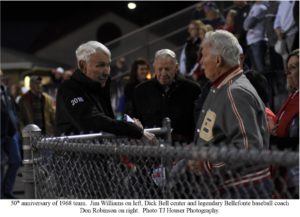 The defensive coach at Bellefonte, his 1966-69 defenses were rock solid for Bellefonte those years. During the week of the 1968 game with Lock Haven, Jim Williams was sick with the flu. After missing Monday and Tuesday practices, he showed up at practice Wednesday with a temperature of 103. The kids sent him home with one request-be better by Friday. He was as the Raiders trounced the Bobcats 48-7 before 6,000 fans at Bellefonte, getting 585 yards of offense. Afterwards, Jim said, “If it means we play like this all the time, maybe I should stay away more often,” he laughed.

Jim enjoyed his years at Bellefonte, calling Bill Luther one of the best coaches in Pennsylvania. He said the biggest thing was that at Bellefonte the coaches kept their fingers crossed that no serious injuries would occur among the starters while at State High he had the privilege of having depth with more players on the roster. For instance, his first year at State in the Iron Kettle game, State had 3 two-way players while Bellefonte had 8. 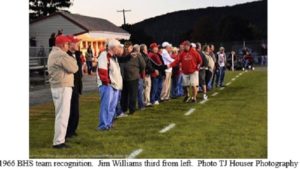 Jim didn’t coach the 1969 team as that year he took a head coaching position with State College and he began building a dynasty. Within 2 years his Little Lions began mowing down opponents and in 1970 began a stretch of 36 straight wins that started with, ironically, Bellefonte and didn’t end until after a 1974. In between he coached some great players to a mythical  PIAA State Championship in 1973. By 1972 Jim Williams had turned State High into such a power that old rivals Bald Eagle Area and Philipsburg were no longer on the schedule, with Bellefonte and Huntingdon leaving after 1972 and Tyrone after 1973. Williams remained Head coach at State College High School from 1969-76 accumulating a record of 68-13 before taking a position at Penn State with Legendary coach Joe Paterno. Adding in his Bellefonte record as an assistant, he enjoyed an astonishing coaching record of 90-16! 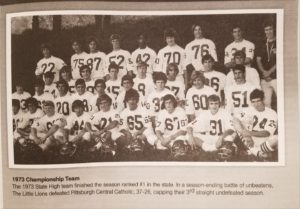 John Sefter and Paul Suhey (who were selected to the all-state and Big 33 teams, went on to win PIAA heavyweight wrestling titles, and became successful orthopedic surgeons in State College….Dr. Sefter fixed this authors back in January of this year), three time All State Matt Suhey, Clay Singletary and Gary Ellis were among those players who also found success under Williams tenure as a coach . It was Matt Suhey who starred at Penn State, then with the Chicago Bears. Suhey calls it a “tossup between that State High team and the 1985 Chicago Bears”, who won the Super Bowl, as to which was the best team he ever played on.

Jim was much more that just a football coach and enjoyed many sports. He played baseball in the Centre County Adult Baseball League from 1958-73 -Hitting: 560AB, 152 hits, 84 runs, 58 rbi’s 5 hrs, 7 stolen bases, 25 doubles, 5 triples, career .271 average. Pitching: 2-12, 60 strikeouts, 50 base on balls, 2 wild pitches and 7 hit batters. Local beat writer Ron Bracken remembered him well. “Just a great guy. And not just a football coach. I played softball with him and baseball against him. Tremendous competitor. From a member of the media standpoint he was just very respectful and a pleasure to be around. But The job he did with that State high team from 72-76 was unbelievable. One of the best high school football coaches in Centre County history.” Jim was inducted into the Centre County hall of fame along with Ron last October. 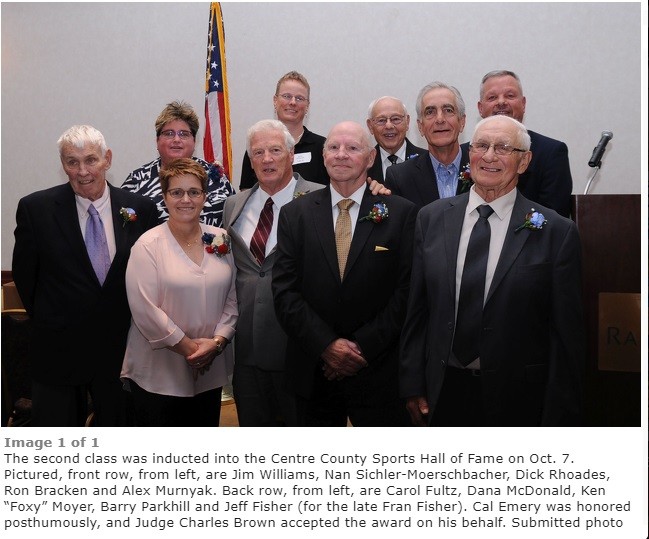 One of the best stories came from a former State High player that was on the 1973 Title team, Larry Suhey. “He had a unique sense of humor. He picked up on a lot of saying from Rip Engle and Joe Paterno like “put them in the nickel seat”. One time at the end of practice he says “ok, let’s put all the bags in the shed.” Then he says “oh my God I can’t find the key so he had everyone on the team get on their hands and knees looking for that key and, can you imagine driving by on Atherton Street and seeing all these players crawling around? Turns out the key was on a shoestring tied around his neck! One of the players looked up and said “There’s the key!” We all thought that was pretty funny.”  Larry nearly didn’t play for that team because before his sophomore year his parents had him attend Kiski Prep, 1 hour west of State College. “I would do anything for that man. Before my sophomore year my parents sent me off to Kiski Prep. When they hired Jim my parents brought me back. I did NOT want to go to Prep school.”

Tyler Kaluza is an assistant at State College, and Jims Grandson. This morning he posted a message to his grandfather: “RIP to the man known by Jim, Ace, Dad, Coach but more importantly to me, Pa. You were the reason I got into coaching and teaching- if I can make even half the impact you had on players at State High and PSU, then I’ll take that. I’ll be coaching this one for you on Friday night.” His decision to become a coach was definitely influenced by his “Ace”. “You don’t really know the impact he has on the kids until you see him coach. He’s one of the reasons I got into coaching. ”

One theme that stood out talking with former players and coaches was the meticulous style with which he coached. Pavlechko was an assistant for Williams. “He did so much preparing for that 2 hr practice and a 10 minute drill. He had a knack for dealing with kids and dealing with teams that put his teams in a position to win for every game. He could yell, but mostly what he did was on paper preparing and teaching kids how to play a position and the game. He put together a staff that really was prepared and taught them what needed to be done.  I mean, the guy was a mastermind.” Pavlechko succeeded Williams at State but started as an assistant right out of college. The way Jim brought him in left a lasting mark. “As a college senior coming out and getting a teaching job at State College he came to my house and said “I am interested in adding a football coach and would I be interested in the job?” After playing football through jr. high and Penn State I had some great coaches. Joe Paterno, Billy Davis and I really didn’t know who Jim Williams was. But I soon found out when I began to coach with him. At our first work out I saw the passion in how he coached, the organization which he had and the thinking that went into his planning I thought “this is what coaching football is.”

John Sefter was a captain on the 73 team and echoed those sentiments. “He was the best coach in Pennsylvania. He was phenomenal. We all loved him and respected him as a coach. We were tremendously organized and motivated. He would take the kid that was a good athlete and the ones that weren’t great and he made them great players.”

Coach Williams retired as an administrator at Penn State, but football called him back to the field when Al Woslki came to coach the Little Lions in 2003.  “Jim was a quiet but knowledgeable man and was an integral part of our staff as our defensive coordinator” said the former State College head coach. “It was nice for him and me, we both gained something out of it. (coming back to State College)  he was up at Penn State and retired and this game him something to do that he liked to do. The thing about him was, here he was an elderly coach but the kids really took to him and respected him”. It was with Wolski that Williams got another crack at a state title. In 2009 the Little Lions advanced to the championship game but fell short to LaSalle in a driving snowstorm. 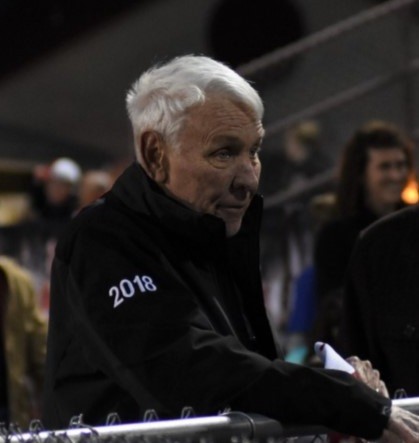