Reynolds Raiders too much for Eisenhower in D-10 quarterfinals 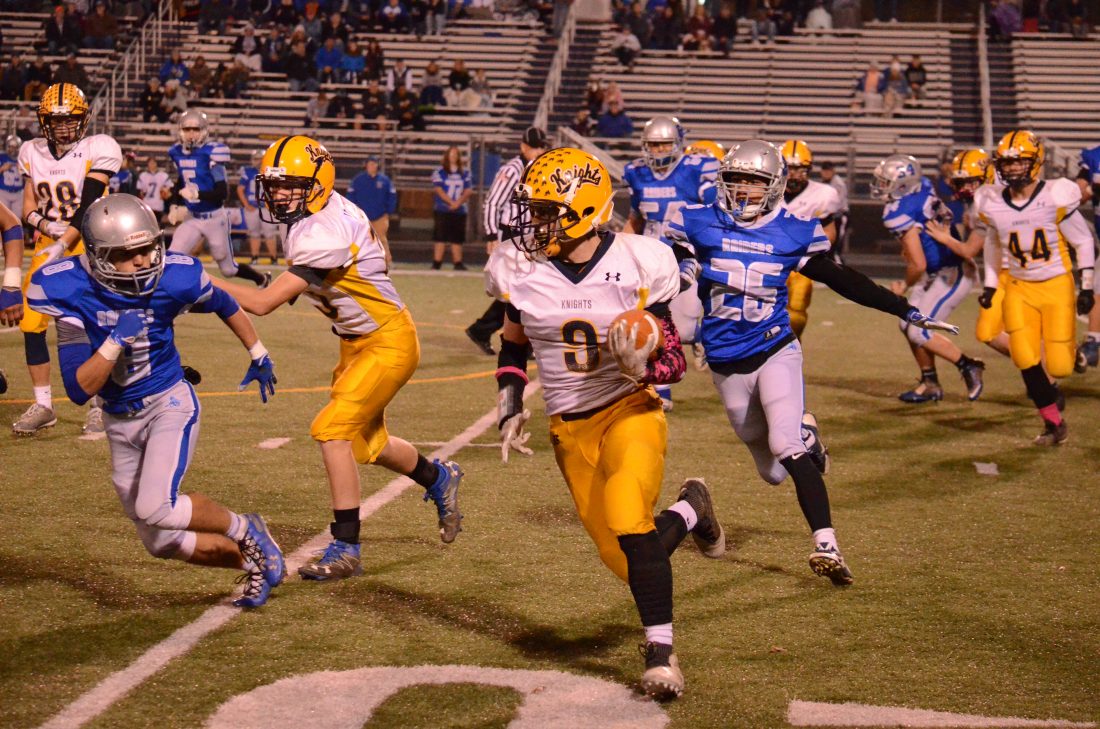 Eisenhower’s Zane Alexander (9) looks for running room during the first half of a District 10 Class 1A quarterfinal playoff game against Reynolds at Wilmington Area High School, Friday, Oct. 25, 2019. The Raiders advanced to the semifinals with a 43-7 win over the Knights.

NEW WILMINGTON, Pa. – When Reynolds and Eisenhower met during the regular season, the Knights held a 6-0 lead after the first quarter and trailed just 14-6 at the half.

The Raiders made sure that didn’t happen again during their District 10 Class 1A quarterfinal playoff game at Wilmington on Friday. After stopping a potential kick return touchdown by a shirt sleeve on the opening kick, Reynolds went to work and put the game away early in a 43-7 win.

“They’re a very good team,” Eisenhower coach Jim Penley said. “We knew what we were in for.”

Eisenhower’s Caleb Robinault took the opening kickoff from just outside his own 10 made a couple men miss and appeared on his way to the open field. Reynolds kicker Rocco John-Daniello grabbed Robinault’s sleeve just hard enough to slow his momentum and allow other Raiders to converge on the tackle.

The Raiders forced a three-and-out and methodically drove down the field. Aidan Mull capped a 14-play 75-yard drive with a 13-yard touchdown run to put Reynolds up 7-0 with just three minutes to go in the first quarter. 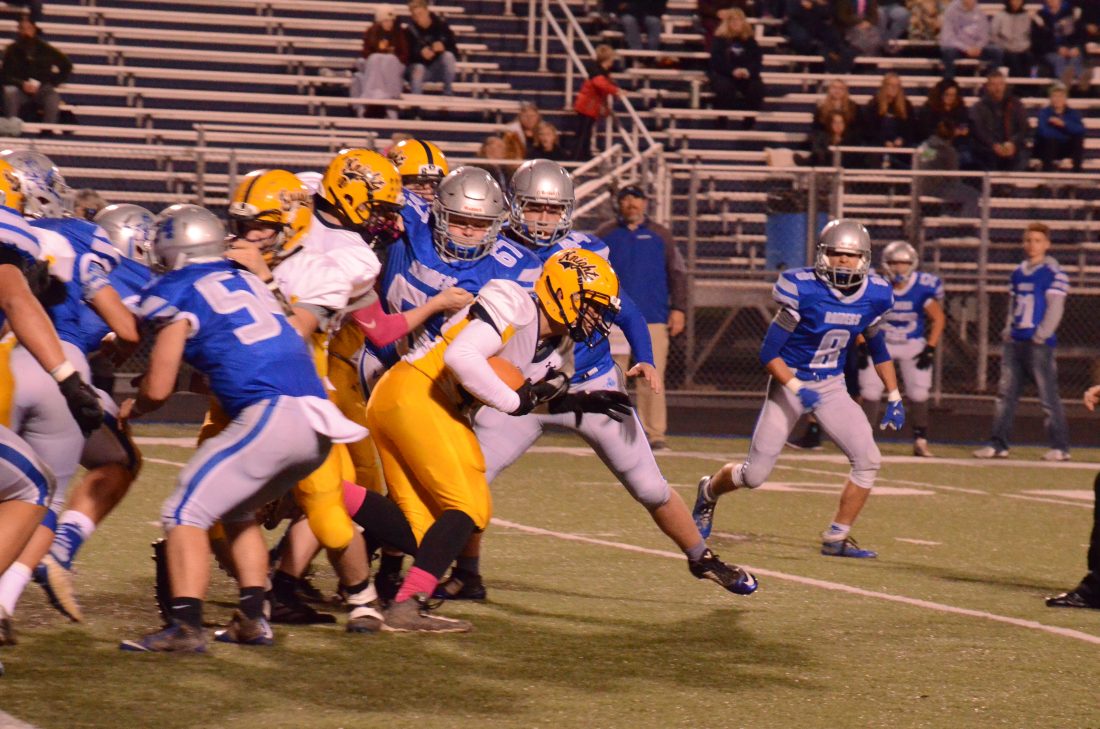 Eisenhower’s Alex Roberts (44) plows ahead for extra yards during the first half of a District 10 Class 1A quarterfinal playoff game against Reynolds at Wilmington Area High School, Friday, Oct. 25, 2019. The Raiders advanced to the semifinals with a 43-7 win over the Knights.

On Eisenhower’s third play from scrimmage, Owen Trumbull’s pass was tipped and deflected right into Clayton Rhoades’ waiting arms. Rhoades took the ball 35 yards down the right sideline for a 14-0 first-quarter

Facing third-and-14 on the next possession, Trumbull, uncharacteristically inaccurate on the night, missed his intended target. Nate Miller intercepted the pass and set the Raiders up with great field position.

“We handled their pressure better tonight than last game,” Penley said. “But they knew what we were going to do and made some adjustments (defensively).”

Cole Toy ran in the first of his three touchdowns in the game from five yards out and Reynolds led 21-0 early in the second. Toy ran in his second score from 16 yards on the Raiders’ next possession to make it 28-0 with seven minutes to play in the first half.

The Knights misplayed the ensuing kickoff and took over at their own 3. Two consecutive false start penalties had them backed up inside the 1 and Trumbull was sacked in the end zone for a safety on third down.

Quarterback Bryce McCloskey connected with Miller on the first play from scrimmage for 52 yards, but a personal foul penalty backed the Raiders up to the Eisenhower 25. Two plays later, McCloskey hit Mull down the right sideline for a 27-yard scoring strike and a 37-0 halftime advantage.

“This is why we play Mercer County teams (in the regular season),” Penley said. “This is the kind of team we want to be. They just have a toughness about them.”

Reynolds elected to kick to start the second half and Eisenhower put together its longest drive of the game to that point.

The Knights looked poised to score after going 41 yards in nine plays, but Mitchell Mason burst through the line on third down to sack Trumbull and Eisenhower couldn’t convert on fourth down.

Toy punched his third score in from the 5 to give Reynolds a 43-0 lead with just over two minutes to play in the third.

With six minutes to play, Logan Abbott recovered a Reynolds fumble to give the Knights the ball at their own 29.

The Knights turned to the ground and Zane Alexander on the drive. He gained 60 of his team-high 87 rushing yards on the drive and capped it off with a 20-yard touchdown run to put Eisenhower on the board.

Toy led all rushers with 101 yards on 12 carries with three touchdowns. Sean O’Hara added 69 yards on 9 runs and Mull had 20 yards and a score. McCloskey finished 5-6 passing for 121 yards and a touchdown. Seventy of those yards and the score went to Mull on three receptions.

Alexander led the Knights with 104 total yards, 87 on the ground, and a score. Trumbull, who came into the game with a completion percentage above 65 and only two interceptions, finished 5-14 for just 27 yards and two picks.

Reynolds moves on to the semifinals and a matchup with undefeated Maplewood, at a date, time and location to be determined.

Eisenhower’s season comes to a close, but the Knights graduate just two seniors.

“I told them to look around and see Reynolds celebrating-which they deserve,” Penley said. “Now they know the level of work it takes not only to get here, but to get here and win.”